Dangerous vaccines found to cause symptoms of shaken baby syndrome

Over the years, parents have more and more commonly been blamed of child abuse if their child is diagnosed with the “triad” of injuries associated with Shaken Baby Syndrome (SBS) after receiving a vaccine. The “triad” includes bleeding inside the brain, bleeding behind the eyes and swelling or inflammation of the brain.

When a medical professional suspects that a baby has been violently shaken, they will examine the baby for the “triad” of injuries associated with SBS. These are subdural haematoma (bleeds inside the brain), retinal haemorrhages (bleeds behind the eyes) and cerebral edema (swelling or inflammation inside the brain).

The Triad of Injuries

Bleeding Inside the Brain

Norma Guthkelch, a retired neurosurgeon, wrote the first description of Shaken Baby Syndrome in 1971 in his paper Infantile Subdural Haematoma and its Relationship to Whiplash Injuries, in which he discussed 23 cases of strongly suspected parental assault on children under the age of three. He concluded that: 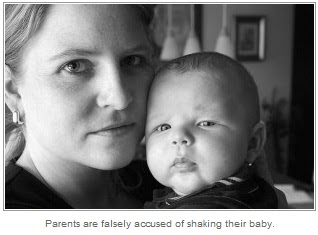 “It has been shown that there is a discrepancy between the frequency of subdural hematoma occurring in battered children and of the same condition complicating head injuries of other origin, the incidence in the former being unexpectedly high, though in most of those in whom there was no actual skull fracture there was not even clear evidence of the application of direct violence to the head. This suggests that when the head is not the main target of attack the likely mechanism of production of the hematoma is one in which repeated sheering strains of one sort or another are applied to the cranial contents.

Dangerous vaccines found to cause symptoms of shaken baby syndrome