Smoke herbicide and pesticide all day and what do you get? You get a recurring hangover that seemingly needs a new blast of nicotine to quell or “dissipate,” but in actuality, the only thing the nicotine does is stave off the headache, the nervousness, the anxiety, the “chemical hangover,” and after 30 to 40 minutes, it kicks in again, that feeling of angst, of unnecessary worry, and you need another fix. What is the TRUE driving force of the cigarette addiction? Could it possibly be that the 4,000-plus chemicals, which are comprised of pesticide and different super strength herbicides, cause a “hangover” which beckons for relief?

GMO tobacco means that scientists in labs are injecting or infusing the genes of bacteria from the DNA of other living things into the seeds of the tobacco plant. GMO tobacco also means that pesticide and herbicide are inside the tobacco plant, and that farmers who use GM pesticides are spraying up to TEN TIMES MORE RoundUp and other poisons on the crop, adding exponentially to the toxicity of the smoker’s nightmare, where these bug and weed killers are mixed with bacteria in the lungs, the heart and the brain, compounding the inability of the pack-a-day smoker to ever quit the habit.
(http://www.naturalnews.com/039233_tobacco_ammonia_cigarettes.html) 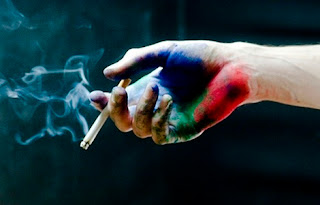 Let’s examine what is occurring every time someone smokes a genetically modified cigarette. When the cigarette burns at 1700-degrees Fahrenheit during the inhale, the pesticide is mixed with ammonia-treated nicotine, and creates a chemical cocktail for the central nervous system to engage. The vicious cycle deepens.(http://www.naturalnews.com/036175_smoking_…)

http://www.riseearth.com/2013/06/ninety-percent-of-us-tobacco-is-gmo-hey.html#more
90 percent of US tobacco is GMO - hey smokers - you're smoking pesticide!