By Rachel Sanders
(Apologies in advance.)

1. Greek yogurt manufacturing produces millions of pounds of (toxic) acid whey waste every year, and no one knows what to do with it.

From Modern Farmer’s fascinating story about how to deal with the whey problem:

“For every three or four ounces of milk, Chobani and other companies can produce only one ounce of creamy Greek yogurt. The rest becomes acid whey. It’s a thin, runny waste product that can’t simply be dumped. Not only would that be illegal, but whey decomposition is toxic to the natural environment, robbing oxygen from streams and rivers. That could turn a waterway into what one expert calls a ‘dead sea,’ destroying aquatic life over potentially large areas. Spills of cheese whey, a cousin of Greek yogurt whey, have killed tens of thousands of fish around the country in recent years.” 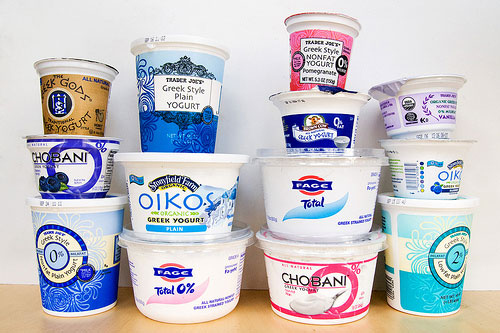 No matter what time of year it is and which oranges the juice came from, big beverage companies make their products perfectly consistent by mixing the juice with carefully calibrated, brand-specific orange flavorings. These mixtures are added to replace the natural flavors lost when juice is chemically stripped of oxygen (“deaerated”) so that it can be kept in storage tanks for more than a year (!) without oxidizing.

Because the added flavor is technically derived from orange oil and extract, it doesn’t need to be specifically listed in the ingredients. Read more here.
Source: theohioanpioneerliterature.wordpress.com

3. This is how the ingredients for packaged veggie burgers get mixed together:

In a huge wheelbarrow. With a shovel. OMG, I love this so much. Watch the whole Science Channel video here.
Source: youtube.com

4. Most commercial milk is made by combining, heating, homogenizing, and repackaging the milk of hundreds of cows. 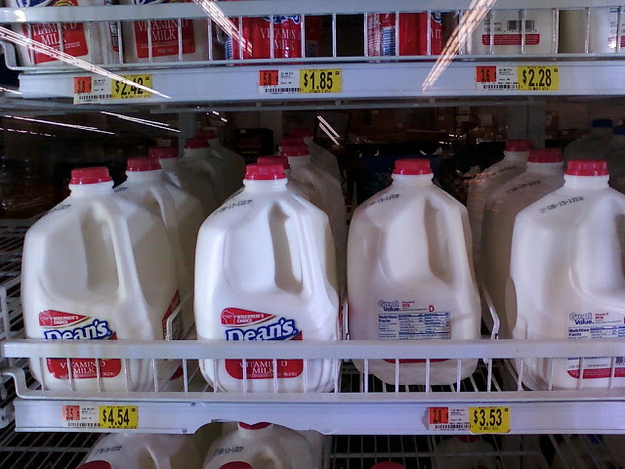 Milk gets separated by huge industrial centrifuges into components (fat, protein, and other solids and liquids). Those milk parts are then recombined in various proportions to make perfectly uniform whole, low-fat, and skim milks.

Read more about the process — and how raw milk (aka the kind that comes straight from cows) became a thing of the past — in this L.A. Times article.
Source: alwaysbcmom.com

5. Maraschino cherry producers bleach the fruit with chemicals and then marinate it in huge vats of corn syrup and dye to turn the cherries red again. 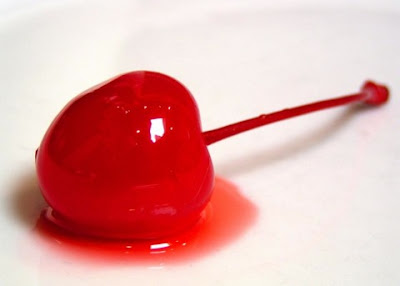 6. Many canned soups are flavored with MSG, even when they claim they aren’t. 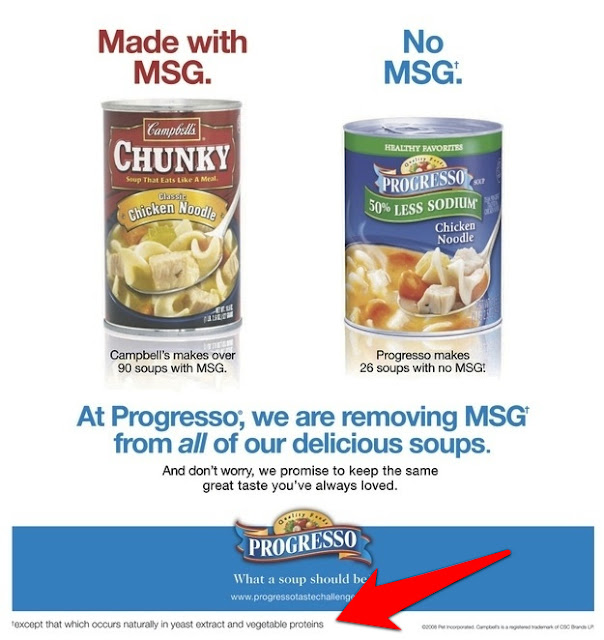 The additive gives soups a meat-like flavor that helps make up for canning-induced blandness and less salt (many brands have reduced their use of salt thanks to nutrition concerns about high sodium levels).

MSG isn’t necessarily bad for you, but soup makers sneakily get around admitting that they use it by referring to it as “naturally occurring” (because it’s refined from vegetable and yeast proteins) and listing it in the ingredients as “yeast extract” or “hydrolyzed protein.” An actual ad war broke out in 2008 because Campbell’s and Progresso were so worried that customers wouldn’t buy soup they knew contained MSG.
Source: online.wsj.com

7. The canning process for soup is so violent that companies grow huge, super-tough carrots for the soup so they won’t disintegrate. 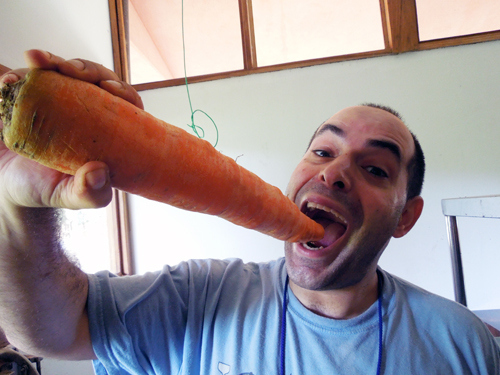 8. Many ice creams are thickened and stabilized with carrageenan, which is actually a seaweed extract. 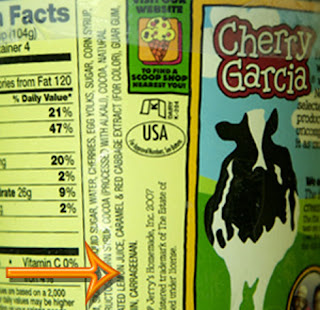 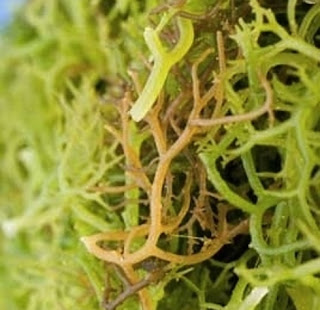 9. Hot dogs are filled with a gloopy blend of meat trimmings, fat, and starch or “cereal filler.”

Cereal filler = bread crumbs, oatmeal, or flour, because who wouldn’t want oatmeal in their frankfurter? And that’s not to mention all the lovely flavors, dyes, and preservatives that might be floating around in there too. If you feel like barfing even more, check out this video of the production process. 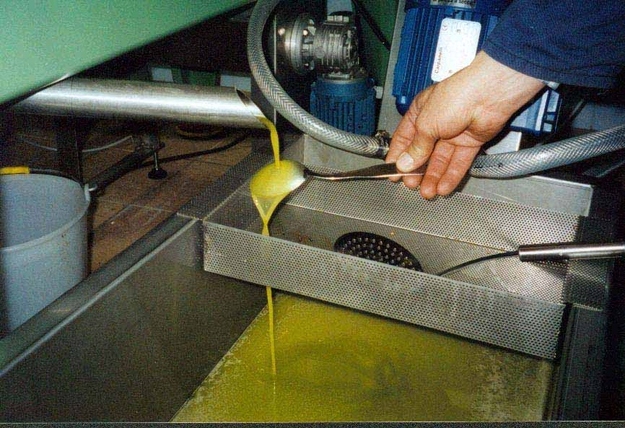 11. Red- and pink-colored products are often dyed with cochineal extract, aka the bodies of crushed-up teeny insects.

Including all of these familiar friends. Cochineal extract is also sometimes listed as carminic acid or carmine. You can learn more about the delicious process of making the dye here.

12. Coffee creamer is made of corn syrup and (hydrogenated, trans-fatty) vegetable oils. 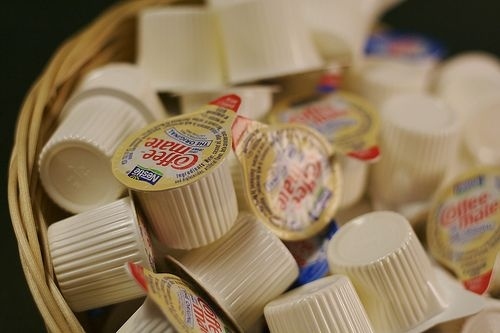 Ain’t no cream in there. Here are the ingredients listed on the label of Coffee-Mate Original Liquid creamer:

And if you need another reason to stop putting creamer in your coffee, check out the super-fun texture you get when all those ingredients team up!

13. To make bacon, pork bellies get hung up in this weird carwash closet machine and showered with “liquid smoke.”

14. Shredded cheese is packed with cellulose — aka refined wood pulp — to keep it from clumping. 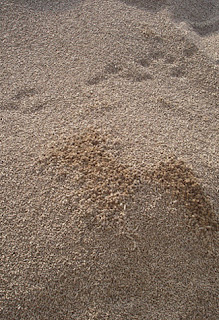 Cellulose, made from broken-down plant fibers (including wood), is a common food additive that can also make ice cream creamier or salad dressing thicker without adding calories. Since it’s naturally derived, even packaged foods labeled as organic often include cellulose. Sawdust! Who knew?
Source: www.buzzfeed.com