According to researchers at the University of California, San Francisco, sugar poses a health risk—contributing to around 35 million deaths globally each year. So high is sugar’s toxicity that it should now be considered a potentially toxic substance like alcohol and tobacco. Its link with the onset of diabetes is such that punitive regulations, such as a tax on all foods and drinks that contain “added” sugar, are now warranted, the researchers concluded. They also recommend banning sales in or near schools, as well as placing age limits on the sale of such products.Sugar’s harmful effects do not stop at diabetes, metabolic syndrome, hyper- and hypoglycemia, GERD and heart disease. Sugar and cancer are locked in a death grip, yet oncologists often fail to do what’s necessary to stop their patients from feeding their cancers with sweets.

Whereas many within the mainstream medical community insist on promoting the belief that the link between certain types of food with an increased risk of cancer is “weak” or only “nominally significant.” They believe that research “linking foodstuffs to cancer reveals no valid medical patterns.” We also find such superficial attitudes promoted in the medical press-all of which lack any kind of medical depth. 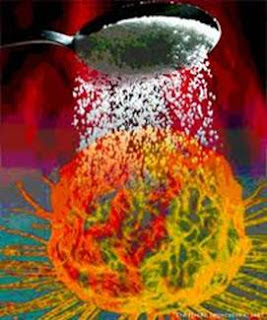 An increasing number of medical scientists and many alternative practitioners know that the most logical, effective, safe, necessary and inexpensive way to treat cancer is to cut off the supply of food to tumors and cancer cells, starving them with a lack of glucose. The therapeutic strategy for selective starvation of tumors by dietary modification (ketogenic diet) is one of the principle forms of therapy that is necessary for cancer patients to win their war on cancer.Researchers at Huntsman Cancer Institute in Utah were one of the first to discover that sugar “feeds” tumors. The research published in the journal Proceedings of the National Academy of Sciences said, “It’s been known since 1923 that tumor cells use a lot more glucose than normal cells. Our research helps show how this process takes place, and how it might be stopped to control tumor growth,” says Don Ayer, Ph.D., a professor in the Department of Oncological Sciences at the University of Utah.
http://www.riseearth.com/2013/03/cancer-sugar-strategy-for-selective.html#more
Cancer & Sugar - Strategy for Selective Starvation of CancerGERD and heart diseasehyper- and hypoglycemiametabolic syndromeSo high is sugar's toxicity that it should now be considered a potentially toxic substance like alcohol and tobaccosugar "feeds" tumorssugar poses a health risk—contributing to around 35 million deaths globally each yearSugar's harmful effects do not stop at diabetes