Sumerian culture and the Annunaki

Sumerian Culture and the Annunaki

Working from the same archaeological discoveries, artifacts, and recovered records as archaeologists and linguists have for two hundred years, Sitchin propounds – proves, in the opinion of this author — that the Anunnaki (Sumerian: “those who came down from the heavens”; Old testament Hebrew, Anakeim, Nefilim, Elohim; Egyptian: Neter), an advanced civilization from the tenth planet in our solar system, splashed down in the Persian gulf area around 432,000 years ago, colonized the planet, with the purpose of obtaining large quantities of gold. Some 250,000 years ago, the recovered documents tell us, their lower echelon miners rebelled against the conditions in the mines and the Anunnaki directorate decided to create a creature to take their place. Enki, their chief scientist and Ninhursag their chief medical officer, after getting no satisfactory results splicing animal and Homo Erectus genes, merged their Anunnaki genes with that of Homo Erectus and produced us, Homo Sapiens, a genetically bicameral species, for their purposes as slaves. Because we were a hybrid, we could not procreate. The demand for us as workers became greater and we were genetically manipulated to reproduce. 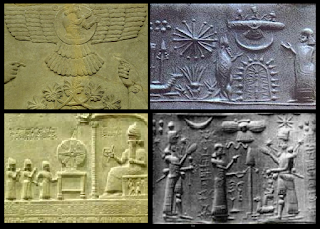 Eventually, we became so numerous that some of us were expelled from the Anunnaki city centers, gradually spreading over the planet. Having become a stable genetic stock and developing more precociously than, perhaps, the Anunnaki had anticipated, the Anunnaki began to be attracted to humans as sexual partners and children were born of these unions. This was unacceptable to the majority of the Anunnaki high council and it was decided to wipe out the human population through a flood that was predictable when Nibiru, the tenth in our solar system and the Anunnaki home planet, came through the inner solar system again (around 12,500 years ago) on one of its periodic 3600 year returns. Some humans were saved by the action of the Anunnaki official, Enki, who was sympathetic to the humans he had originally genetically created. For thousands of years, we were their slaves, their workers, their servants, and their soldiers in their political battles among themselves. The Anunnaki used us in the construction of their palaces (we retroproject the religious notion of temple on these now), their cities, their mining and refining complexes and their astronomical installations on all the continents. They expanded from Mesopotamia to Egypt to India to South and Central America and the stamp of their presence can be found in the farthest reaches of the planet.
Read the entire post at the website on top of this post!
Share this story:

Tags: Sumerian culture and the Annunaki

Health coach since 1968. Published The Clean Green Thumb (1968-1971) and Green Power (1971-1974) and Carolina Health & Healing, which changed into Integrative Health & Healing when we went national for 3-1/2 years. Currently producing raw food books and a quarterly magazine called Wellthy Choices. Click on the Products tab to see what's currently available. NOW offering In Light light therapy sessions - your space or mine - in Apache Junction, AZ area! email me for appointment: jan.jenson@yahoo.com Subject: In light session, please! Apache Junction, AZ area or contact me and I will help you find a practitioner in your state. Check www.inlightmedical.com for videos and info about light therapy. Call me for information or an appointment: 980-328-2363.

Get The Latest Issue!